Hanging Out in Sequim, WA

I’ve been in Sequim, WA since June 12th or so and I think I’m in love…with Sequim and the Olympic Peninsula.  What I like about Sequim is how laid back it feels.  There’s no frantic traffic and the people are very friendly.

What I don’t like about Sequim is the lack of a Chipotle and Fred Meyer.  The two largest stores here are Costco and Walmart.  Since I refuse to shop at Walmart my options are a bit limited.  Costco is good for gas for the rental car.   Unfortunately, they don't carry diesel which I need for my View.

Port Angeles is about 15 miles from here and they have Swains, which carries a lot of stuff and is fun to walk through.  It feels like a throw back to times long gone.  Since there’s also no Camping World close by, they’ve saved me a couple times in their limited RV section.

Seriously needing a Chipotle fix, my friend and I drove to Olympia a couple weeks ago, which had both a Chipotle and Fred Meyer.  It was also 90 degrees there, part of a heat wave going through the area.  Even Sequim was impacted although, fortunately, it never reached the 90s.  Seattle and everyone else got the 90s.

Living in the desert I’d forgotten what heat and humidity felt like and I’m glad it finally got cloudy and cool.

This feels so right to me being back in Washington.  I lived in the Seattle area for about 45 years, so I think that’s understandable.  However, I like it over here on the peninsula a whole lot more than I do on the Seattle side.

There’s less traffic and franticness over here.  The summer temperatures I've experienced have been in the high 60s to low 70s, until the heat wave went through.

It feels clean to me. I think because of the grass and trees.

The RV parks here are interesting.  The first one I stayed at is across the street from Sequim Bay.  It’s called John Wayne’s Waterfront Resort.  This is the view from the spot I’ve settled on and call mine… 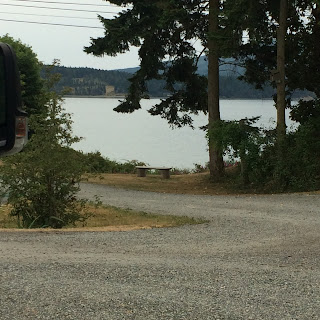 Sadly, lots of people also like this spot, beat me for reservations, so I’m in and out of it.  Right now I’m out of it and parked in front of my friends mother’s house.  While I don’t have a view here, I have quiet. I also just two deer across the street in the cup-de-sac I'm parked in so I guess I do have a view.

John Wayne’s Waterfront Resort is graveled and gravel is noisy.  I haven’t decided yet if the view compensates for the noise.  Also included in the noise are diesel trucks.  Gravel, diesel trucks…noisy.

The other RV park I’ve stayed at here is the Gilgal Oasis RV Park.  It’s paved so it’s much quieter, but it’s jam packed.  The spaces are so close together the second vehicle has to be parked in front of the RV.  It felt very claustrophobic to me. On the plus side, it was immaculate.

I have made it a point of taking a picture of my motorhome at each RV park I've stayed at and it never crossed my mind while I was at Gilgal.  Hmmm.

I'm leaving Wednesday to go Renton, WA to visit a friend from graduate school.   Also, to get away from the Lavender Festival on the 17th, 18th and 19th.  I've been to it four times and don't need to attend any more.

Since I've stayed here longer than ever before I've been able to go to the Lavender Farms without the benefit of the festival.  It's much calmer, I have no trouble parking and I've been able to talk to the owners.  Win, win all the way around.

Here's a cool adirondack chair at a local Lavender Farm... 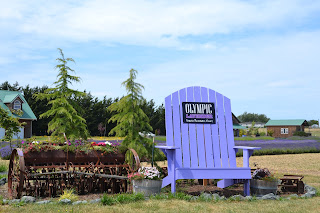 I'm thinking this will be the last time for back to back posts on the same day.  I type my posts in Word and then copy them over to my blog.  It appears that I've copied all the previously written ones over.  From now on I can type in real time.

Posted by Four Windows with a View at 9:14 PM

Four Windows with a View
I first got interested in RVing in 1993 when I bought a Bounder motorhome. Long story short, I ended up pulling a 29' fifth wheel to Tucson from the Seattle area. My son and I lived in the fifth wheel for two years and that was the extent of my RVing. Now that I'm retired, I'm realizing that I don't want to stay in the same place for the rest of my life. The traveling bug that I acquired when I was a military brat is alive and well and telling me to get going!